Sets are one of the basic building blocks for the types of objects considered in discrete mathematics.

Set theory is an important branch of mathematics.

A set is an unordered collection of objects.

The notation a ∈ A denotes that a is an element of the set A.

Specify the property or properties that all members must satisfy :

A predicate may be used :

The universal set U is the set containing everything currently under consideration.

The empty set(null set)is the set with no elements. Symbolized ∅, but {} also used.

Some things to remember

Sets can be elements of sets.

Definition: Two sets are equal if and only if they have the same elements.

Sets can be represented graphically using Venn iagrams, named after the English mathematician John Venn, who introduced their use in 1881. 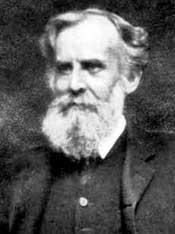 In Venn diagrams the universal set U, which contains all the objects under consideration, is represented by a rectangle. 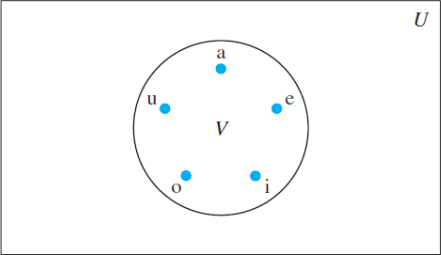 Definition: The set A is a subset of B, if and only if every element of A is also an element of B.

The notation A ⊆ B is used to indicate that A is a subset of the set B.

Another look at Equality of Sets

Recall that two sets A and B are equal, denoted by A = B, iff

Using logical equivalences we have that A = B iff

This is equivalent to

Definition : If there are exactly n distinct elements in S where n is a nonnegative integer, we say that S is finite. Otherwise it is infinite.

Definition: The cardinality of a finite set A, denoted by |A|, is the number of (distinct) elements of A.

Let’ s look at the same example in another way

Propositional calculus and set theory are both instances of an algebraic system called a Boolean Algebra.

The operators in set theory are analogous to the corresponding operator in propositional calculus.

As always there must be a universal set U. All sets are assumed to be subsets of U.

Definition: Let A and B be sets. The union of the sets A and B, denoted by A ∪ B, is the set:

Definition: The intersection of sets A and B, denoted by A ∩ B, is

Note if the intersection is empty, then A and B are said to be disjoint.

Definition: If A is a set, then the complement of the A (with respect to U), denoted by Ā is the set U - A

(The complement of A is sometimes denoted by $A^{c}$.)

The Cardinality of the Union of Two Sets

Example: Construct a membership table to show that the distributive law holds.

What bit strings represent the subset of all odd integers in U?

What bit strings represent the subset of all even integers in U?

What bit strings represent the subset of integers not exceeding 5 in U?

Definition: Let A and B be nonempty sets. A function $f$ from A to B, denoted $f: A \rightarrow B$ is an assignment of each element of A to exactly one element of B. We write $f(a) = b$ if b is the unique element of B assigned by the function $f$ to the element a of A.

Given a function $f: A \rightarrow B$

A is called the domain of $f$

B is called the codomain of $f$ 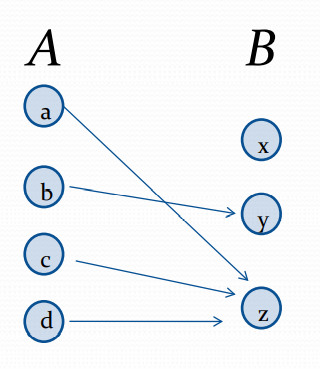 The preimage of y is ? b

A function that never assigns the same value to two different domain elements is said to be one-to-one. 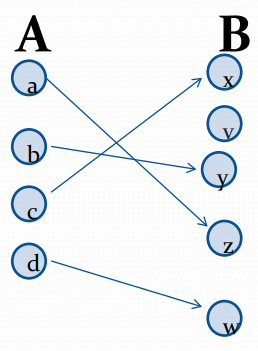 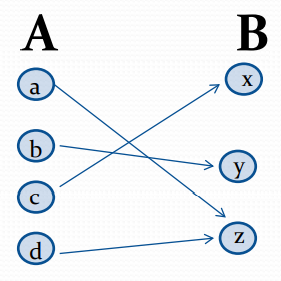 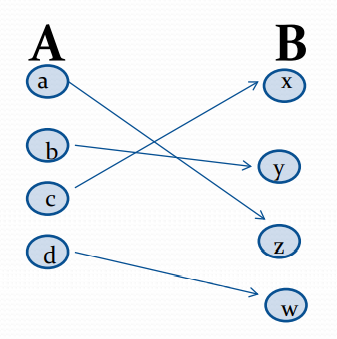 Definition: A function $f$ is a one-to-one correspondence, or a bijection, if it is both one-to-one and onto(surjective and injective). 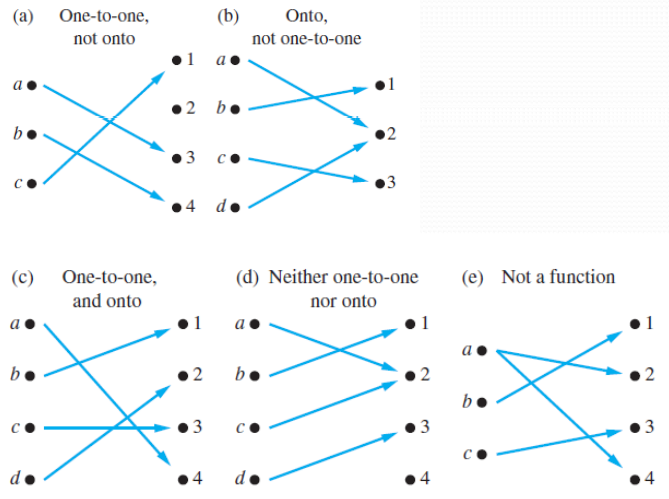 Note that the composition $f \circ g$ cannot be defined unless the range of $g$ is a subset of the domain of $f$.

is the largest integer less than or equal to x.

is the smallest integer greater than or equal to x.

Sequences are ordered lists of elements.

Sequences arise throughout mathematics, computer science, and in many other disciplines, ranging from botany to music.

Definition: A geometric progression is a sequence of the form:

where the initial term a and the common ratio r are real numbers.

Definition: A arithmetic progression is a sequence of the form:

where the initial term a and the common difference d are real numbers.

Definition: A string is a finite sequence of characters from a finite set (an alphabet).

Sequences of characters or bits are important in computer science.

The empty string is represented by $\lambda$.

The string abcde has length 5.

The initial conditions for a sequence specify the terms that precede the first term where the recurrence relation takes effect.

Such a formula is called a closed formula.

Many methods have been developed for solving recurrence relations.

A straightforward method is known as iteration.

An iteration method can be executed using

The variable j is called the index of summation. It runs through all the integers starting with its lower limit m and ending with its upper limit n.

As in the analysis of nested loop in computer program.

To evaluate the double sum, first expand the inner summation and then continue by computing the outer summation:

Matrices, useful discrete structures, can be used to:

Matrices are used to build models of transportation systems and communication networks.

A matrix is a rectangular array of numbers.

A matrix with m rows and n columns is called an $m \times n$ matrix.

Let m and n be positive integers and let

The product of two matrices is undefined when the number of columns in the first matrix is not the same as the number of rows in the second.

Identity Matrix and Powers of Matrices

Definition: A matrix all of whose entries are either 0 or 1 is called a zero-one matrix.

Algorithms operating on discrete structures represented by zero-one matrices are based on Boolean arithmetic defined by the following Boolean operations:

Thanks for the learning resource provided by Qi Wang from University at Albany!